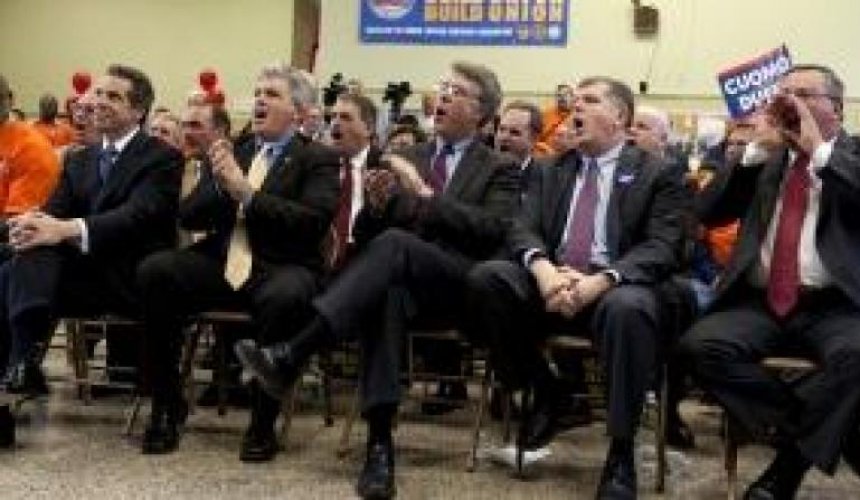 The following story appeared in Newsday on Saturday, October 30th, page A9 by Elizabeth Moore

Attorney General Andrew Cuomo doesn't have universal support among New York's unions, but he got a roaring welcome in Melville Friday from some 400 union members, elected officials and party activists who said their unions would be a partner in correcting New York's fiscal problems.

"What we need to do is make sure we get everyone out and knock on those damn doors so we send the tea party back to the bottom of the river!" said John Durso, president of the Long Island Federation of Labor, at the rally at the Local 66 Laborers Hall. "We're not a special interest - we are the community!"

Cuomo told the Melville rally: "We have to make that state government work again . . . We have to win."

The active support of labor is crucial for the Democrats in a year when polls show Republicans are more enthusiastic about voting.

"You've got the sour mood of the public and a bad economy, and the Democrats are the incumbents - that's always troublesome," said Jay Jacobs, state Democratic chairman, who attended the rally.

"On the other hand, you've got an absolutely abysmal candidate at the head of the Republican ticket," Jacobs said. "The question really is not so much who's persuaded, but who's persuaded enough to actually come out?"

For that reason, Jacobs said his party is mounting what he called "the biggest statewide coordinated get-out-the-vote campaign we've ever had," one that involves 10,000 volunteers, paid canvassers and union workers, to get voters to the polls.

Cuomo's campaign emphasis on a property-tax cap, pension reforms and tight fiscal controls have left him without the endorsement of leading public sector unions such as the Civil Service Employees Association and the New York State United Teachers, whose leaders have been sharply critical of his stances.

But Cuomo has been endorsed by the AFL-CIO and many of its members and Friday, top law enforcement unions gave him their nod. Cuomo also has accepted the Working Families Party ballot line.

In another year, or for another candidate, shaky support from labor could have been dangerous for a Democratic candidate.

But Jacobs said that any union activists reluctant to work for Cuomo this year are just transferring their energies to the campaigns of Comptroller Thomas DiNapoli or the party's would-be attorney general, state Sen. Eric Schneiderman of Manhattan.

Another embattled Democrat who is hoping for labor support is state Sen. Brian Foley of Blue Point, who thanked his "union brothers and sisters" for their support Friday.

And Rep. Steve Israel (D-Huntington) gave a new spin to Durso's claim that it was the labor movement that gave America the weekend.

Elections MATTER. Elect candidates that will fight for good jobs! #LIUNAForBiden #YourVoiceYourVote Make sure you'… https://t.co/k9dPqMDmBB