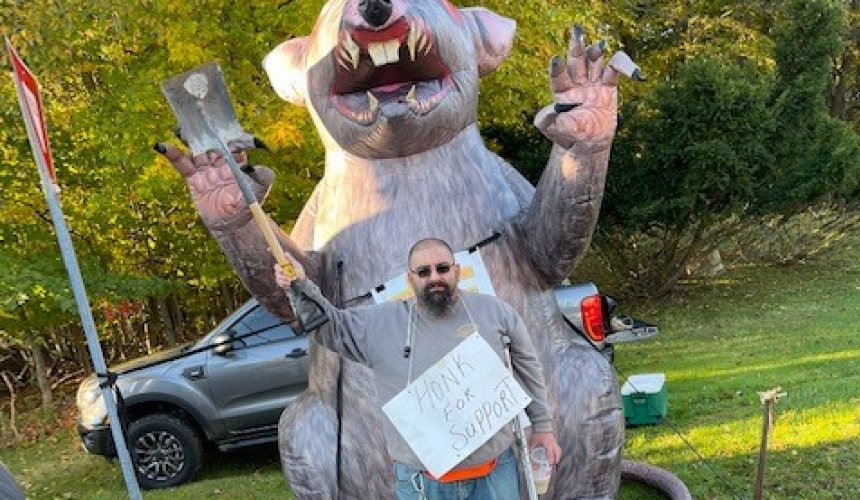 Laborers Protest Out Of State Contract At Stony Brook University

This article was written by the Long Island Press.

The picketers lined up with giant inflatable rats and open coffins outside the south entrance of the university with a sign that read, “Stony Brook University, stop using irresponsible contractors and start paying prevailing wages.” But the university maintains the contract to repair the Jacob K. Javits Lecture Center was awarded fairly to Niram Construction and wage laws are being followed.

“Basically what they’re doing is using out of state contractors that are from New Jersey on taxpayers’ money,” said Anthony Speziale, an organizer with Laborers Local 66, a Melville-based union that represents about 1,000 skilled construction craft laborers in Nassau and Suffolk counties. “It should really be … local contractors that are doing this job.”

The union is the local chapter of the Laborers International Union of North America. It was not the first time the State University Construction Fund has used the same firm that specializes in green building processes. Since 2009, the fund has awarded five other projects at state universities to Niram.

According to the university website, the State University Construction Fund awarded Niram the work to perform a “major rehab of the 1968 lecture hall.” Existing lecture halls will be renovated, technology will be upgraded and mechanical, electrical and safety systems will be replaced.

“Our ultimate goal is to get Stony Brook and give us a [project labor agreement] on this job,” said New Hyde Park resident John Keenan, a business agent from LiUNA! Local 78, a Queens-based union that represents about 3,500 asbestos, lead and hazardous waste handlers in New York City, Long Island, and New Jersey. “If we have the [project labor agreement], we will get good contractors in for the right wage, getting medical benefits and everything else for the workers. Our ultimate goal is to get SUNY to do this, the state university, to bring good contractors, safe contractors and New York contractors.”

In a statement, university officials confirmed that the contract was publicly bid and awarded by the State University Construction Fund to the lowest qualified bidder in accordance with New York State Finance Law.

“Stony Brook University is not administering the contract,” the statement read. “While Niram is a non-union general contractor, who is self-performing some of the work with their own staff, Niram has also been hiring union labor to supplement their staff.”

The statement also confirmed that the state requires that the company pay Suffolk County prevailing wages to whomever they hire on the project, union or non-union, and that it’s been verified that all workers on the Javits Lecture Center project are being paid prevailing wages.

“We are the ones paying taxes on Long Island and in New York State and by giving it to these New Jersey workers, it’s no benefit to our community and our guys are out of work because of it,” Speziale said.