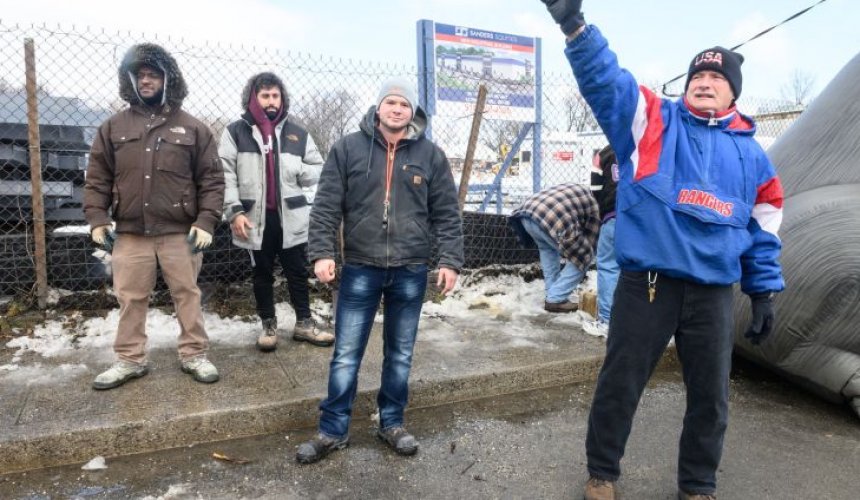 Nassau County is “reviewing” tax breaks granted to a proposed warehouse in Hicksville after allegations from a union about the wages being paid to construction workers.

The county’s Industrial Development Agency will meet Tuesday with Jericho developer Sanders Equities and its general contractor, Racanelli Construction Co. Inc., to discuss the construction workers’ pay and the extent to which union members are employed on the site at 400 W. John St.

The meeting comes after Laborers’ Local Union No. 66 wrote to County Executive Laura Curran alleging that a concrete contractor hired by Melville-based Racanelli didn’t pay the prevailing wage to workers pouring the warehouse’s concrete foundation. The prevailing wage is a guaranteed minimum rate above the state minimum wage.

In its Feb. 6 letter, Local 66 said “construction workers [are] being exploited by substandard contractors who refuse to pay the prevailing wages for Nassau County.”

Executives of Sanders and Racanelli did not respond to requests for comment on Monday. An attorney for Sanders declined to comment. The concrete contractor could not be reached.

IDA board chairman Richard Kessel said Monday he wants to determine “what is going on. … I’m receiving conflicting information from the unions and from the developer. We need to get to the bottom of this and to resolve it. I am not happy,” he said.

Asked if the IDA would rescind 20 years’ worth of tax breaks that it granted last year to the $7.3 million warehouse project, Kessel said, “We are exploring our options.”

The developer received a sales-tax exemption of up to $231,113 on the purchase of construction materials, equipment and supplies. It also was awarded a 20-year reduction in property taxes that freezes the land tax for three years, followed by increases of 1.66 percent in each of the subsequent 17 years and raises the building tax by 1.66 percent each year.

The tax breaks were approved in a 5-1 vote in December; most IDA board votes are unanimous.

The dispute comes as state lawmakers consider bills that would require all projects that win tax breaks or grants to pay the prevailing wage to construction workers. The legislation, sponsored by State Sen. Jessica Ramos (D-Jackson Heights) and Assemb. Harry B. Bronson (D-Rochester), is supported by unions and opposed by business groups, including the Association for a Better Long Island, which represents developers.

At the Hicksville construction site on Monday, Local 66 organizer Miles M. Marsh said, “All we are asking for is a decent wage for a hard day’s work.”

He said the union has been protesting for about a month and wants the IDA to rescind the tax breaks. “It’s our tax dollars. … There are guys here who need work to pay their mortgage and support their kids. This is ridiculous,” he said.

“It’s really unacceptable what’s going on,” he said. “These developers are very profitable, yet they request tax breaks that they don’t need. And then they refuse to pay the area [wage] standard for the work being performed.”